Thousands of drivers in Seattle are racking up big numbers of parking tickets, but not paying the penalties. Now the city is rolling out a new program to bring their free ride to an end.

“I think the big takeaway is we’re giving you a chance to get (your tickets) taken care of without getting the boot,” said Seattle Police Det. Patrick Michaud.

The “boot” is the device used to clamp down on the vehicles of drivers with four or more tickets. But city records show at least 2,000 drivers who qualify have not faced the wrath of the boot and they continue to accumulate tickets.

“It’s not fair”, said Seattle motorist Jason Delarosa. “If you owe it, you need to pay it,” he said.

The city determined the problem was caused by the language of the scofflaw ordinance. It required that the Municipal Court mail a 30-day warning notice to drivers before the boot could be placed on their vehicle. The 2,000 drivers who are basically boot-proof are those for whom the courts or the Department of Licensing do not have a valid address on file.

“So within the confines of the law, if they hadn’t been notified, we couldn’t put the boot on their car and they could continue to get away without paying their parking tickets,” said Det. Michaud.

A KING 5 investigation in 2013 revealed 502 drivers had each accumulated ten or more tickets. A former Capitol Hill business owner topped the list with 146 unpaid parking tickets in a two-year period.

Now the City of Seattle has tweaked the scofflaw ordinance. Instead of mailing the warning notices, parking enforcement officers can place them directly on the windshield of the offending vehicle.

Parking enforcement teams are already scanning license plates on Seattle streets looking for scofflaws who may have gotten away with parking violations for years. They’re placing red 30-day warning notices on vehicles with four or more tickets. They’re also placing “courtesy notices” on cars identified with three tickets. Those warnings explain that one more ticket puts the vehicle owner at risk of being booted or towed. The city says about 15,000 vehicle owners have three parking tickets.

Det. Michaud says the city has many programs to help financially-strapped car owners pay their tickets. He says information about how to get help is written on the courtesy and warning notices. 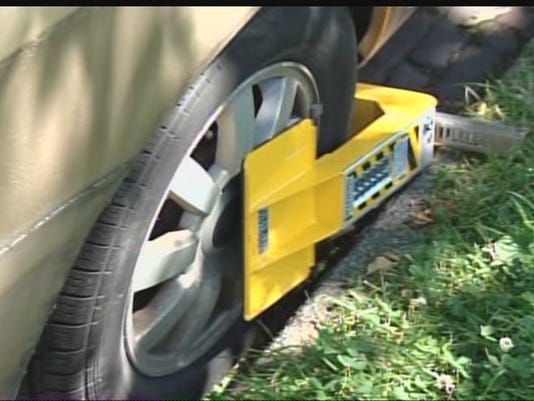 A boot placed on a car with overdue parking tickets.(Photo: KING 5 News)